We will host the first version of the new "Monte Cassino" mission that I have been working on.
The SoW server will go up on Sunday SEP 16th @1900 UK local time.

As usual, Axis pilots are at a premium, so if you know any axis squads, please let them know about this event.

If you read and follow the brief, you can unlock various mission actions that will not otherwise occur.
Mission has 4 hour time limit. There are no "victory" conditions. 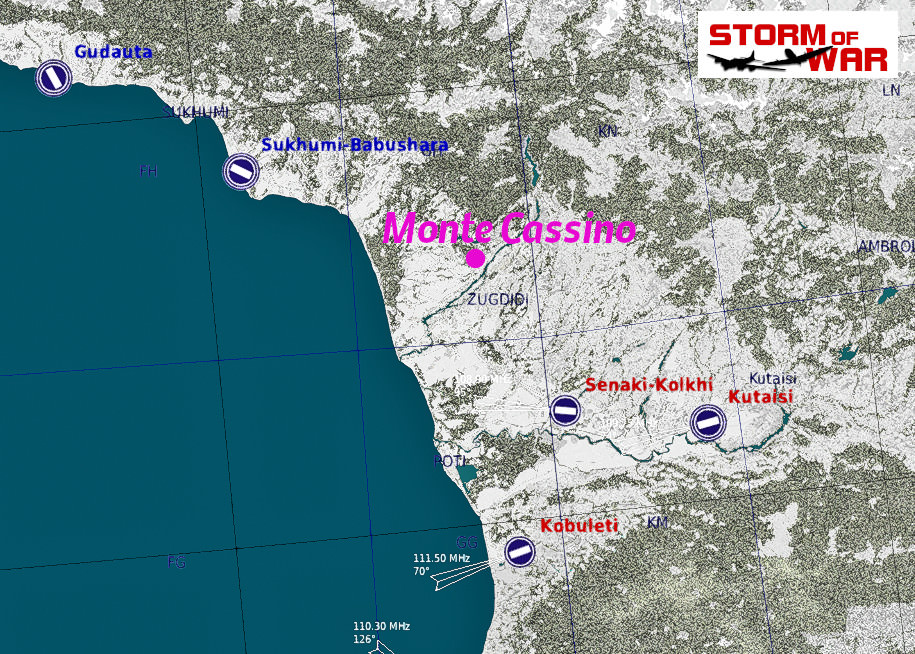 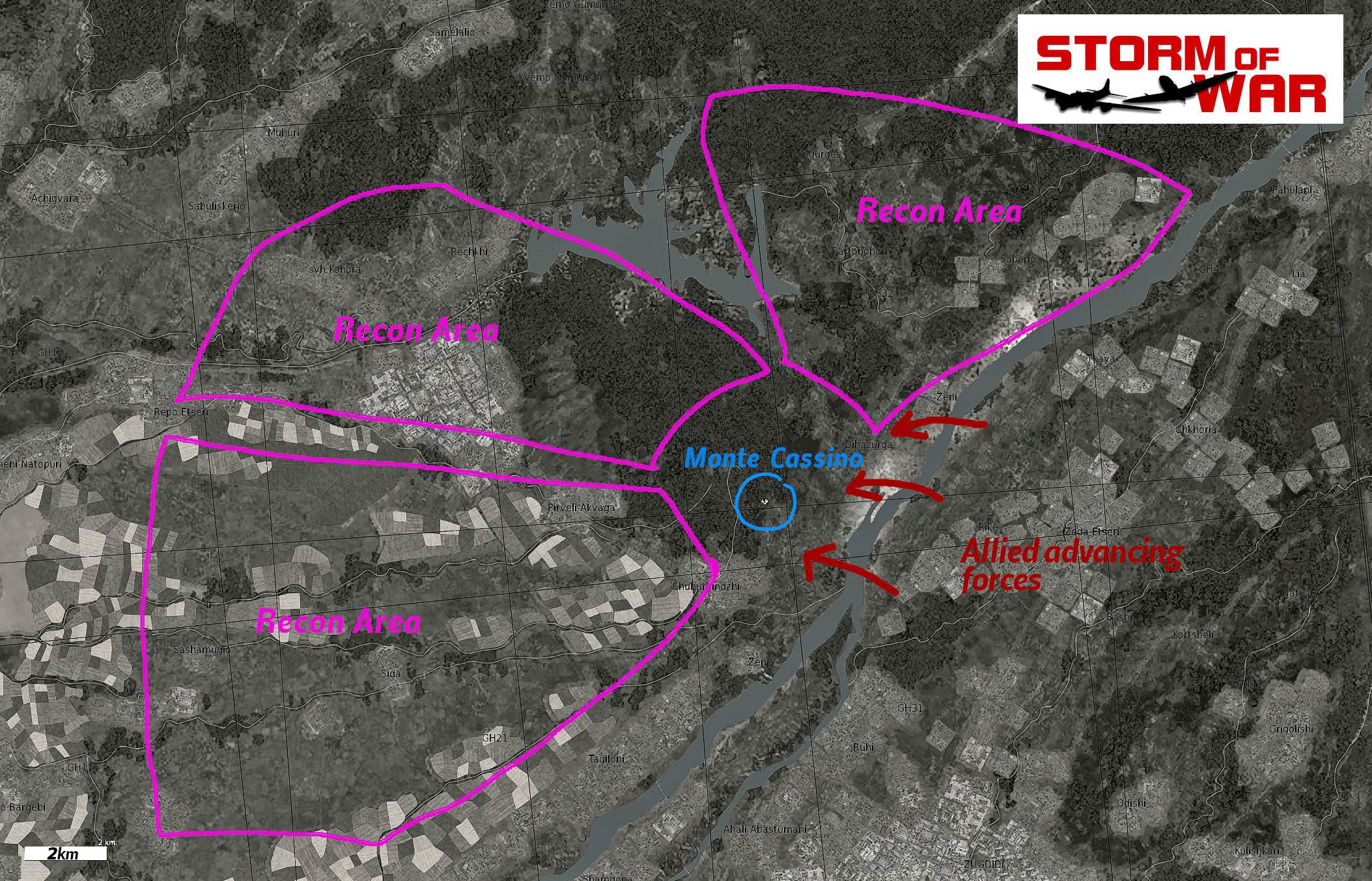 RED (ALLIES) BRIEFING:
Use the F10 menu to check on any additional tasks which might arise during this mission.

ALLIED TASKS
1. Support the Aerial Bombardment (Escort A.I. bomber raids) of German units which are believed to be fortified in and around the Monastery at Monte Cassino. Pilots will be notified of inbound raids via the server messages, top right of screen.

2. Locate (via recon) and destroy (conduct Fighter-bomber attacks) German units which are believed to be located in re-enforcing positions to the north and west of Monte Cassino, within about 15 miles.
Only the T-51 aircraft can be used for recon purposes. Flying a T-51 over an enemy unit will "spot" the unit, and cause it to be revealed. Recon aircraft are advised to fly at high altitude in order to avoid ground fire.

3. Protect Allied ground forces which are attempting to cross the river east of Monte Cassino and are tasked with taking the Monastery,

German Ground units which are stationed to the rear of the Monastery at Monte Cassino must be identified by recon aircraft. Recon P51s are available at "kobuleti".

BLUE (AXIS) BRIEFING
Use the F10 menu to check on any additional tasks which might arise during this mission.

AXIS TASKS:
1. Intercept inbound Allied air raids in the vicinity of Monte Cassino (GH32). Pilots will be notified of inbound raids via the server messages, top right of screen

2. Defend Wehrmacht units which are located in and around the monastery at Monte Cassino from low level attacks,

3. Attempt to interrupt allied forces which are crossing the River at numerous points east of Monte Cassino.

XVII.Fliegerkorps will be there. We'll have to forge new medals, we've been running low on stocks. Allied forces should invest in marble.
Top

Hopefully we can put up a Mustang or two.

If everything goes according to plan, the 362nd will be putting up at least two mustangs possibly more.
Top

Hi all. I'm going to postpone the mission tonight for a week. ED have broken the labels mods and we don't have enough German-side players for an event. I will do some closed testing instead.
YOUTUBE: https://www.youtube.com/philstyle
Top

Hi Phil we are interested!
i'll let you know in a pair of days how many EAF pilots!

EAF51_Jimmi wrote:Hi Phil we are interested!
i'll let you know in a pair of days how many EAF pilots!
I'll check with Italian community and hopefully we'll find some brave ANR (Aeronautica Nazionale Repubblicana) pilots!
PS do you have/need ANR skins??
S!Jimmi

Actually, Phil, I think Jimmi has a valid point. The scenario is set in Italy, post-armistice, by which time the Regia Aeronautica had been split into Aeronautica Nazionale Repubblicana (ANR) and Aviazione Cobelligerante Italiana (ACI). The ANR had a huge selection of aircraft and remained a moderately strong force, despite the split.

The ANR were using starting to use the Bf-109 G-6 in June 1944. Yes, this is technically after the Battle of Monte Cassino, but not by much, and it is no more contrived that the LW using the K-4. Re-skinning the Bf-109 K-4 as an ANR G-6 or Fiat G.55 (or even G.56) may be just the thing needed for a handful of other axis pilots to come and try it out. We could certainly ask some of the good skin-modders to see what is available (=TIA=PorcoRosso86 immediately springs to mind here).

Anyway, by broadening the scope slightly, you could easily improve the appeal to those who are not just core "Spit-v-109" or "RAF-v-LW" pilots. Given that we need to fill out the Axis side, getting some ANR pilots would be pretty cool.

Yep you got my point Dietrich!

EAF51 is mainly an allied squadron. (back in European Air War time we flew spitfire. Historically the only Italian squadron flying spits was the 51 Squadron Equipped with worn out third hand spitfires V in the the ICAF flying in the Balkans in 44)
here www.eaf51.org you can find plenty of phots and stories (both in Italian and English of Regia Aeronautica, ICAF and ANR)

I had a phone call for Cipson of Italian Wing website yesterday and will post an invite there!
I'm sure also Barone can help us!

Since k4 was used by ANR i think one or 2 ANR 109 skins will suffice.
I'm sure we can find some good Italian skinners!


PS i missed previous tests, how many pilots will the server hold?
how many axis pilots do you need?
when is the mission scheduled?

Return to “Storm of War EVENTS”